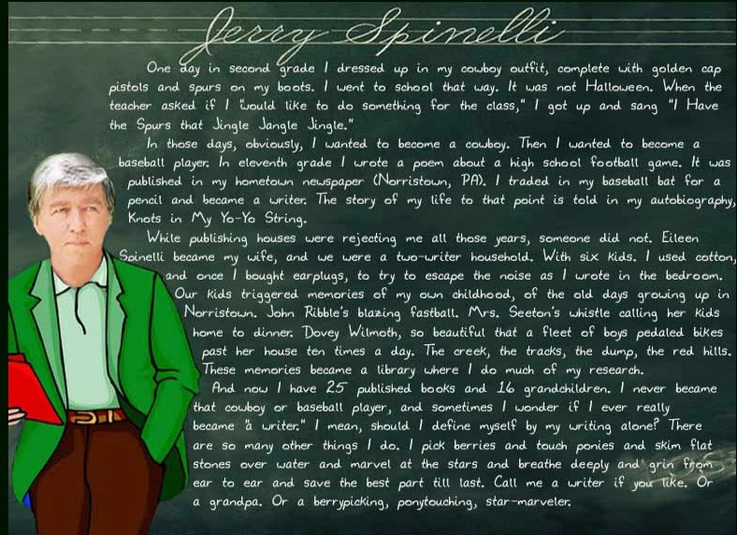 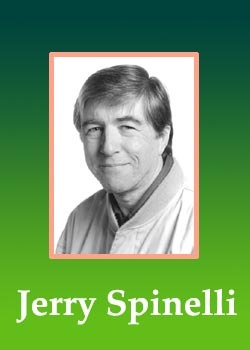 When I was growing up, the first thing I wanted to be  was a cowboy. That lasted  till I was about ten. Then  I wanted to be a baseball player. Preferably  shortstop  for the New York Yankees.
I played Little League in junior high and high school.  I only hit two  home runs in my career, but I had no  equal when it came to standing at  shortstop and chattering  to my pitcher: “C'mon, baby, hum the pea.”   Unfortunately, when I stood at the plate, so many peas  were hummed past me for  strikes that I decided to let  somebody else become shortstop for the Yankees.
It was about that time that our high school football  team won a
heart-stopping game against one of the best  teams in the country. While the  rest of the town was  tooting horns and celebrating, I went home and wrote  a  poem about the game. A few days later the poem was  published in the local  newspaper, and suddenly I had  something new to become: a writer.
Little did I know that twenty-five years would pass  before a book of  mine would be published.
Not that I wasn't trying. In the years after college  I wrote four
novels, but nobody wanted them. They were  adult novels. So was number five, or
so I thought.  However, because it was about a thirteen-year-old boy,  adult
book publishers didn't even want to see it. But  children's publishers did — and
that's how, by accident,  I became an author of books for kids.
Life is full of happy accidents.
Sometimes I'm asked if I do research for my stories.  The answer is yes
and no. No, in the sense that I seldom  plow through books at the library to
gather material.  Yes, in the sense that the first fifteen years of my  life
turned out to be one big research project. I thought  I was simply growing up in
Norristown, Pennsylvania;  looking back now I can see that I was also gathering
material that would one day find its way into my books.
John Ribble's blazing fastball. Dovey Wilmouth, so beautiful  a fleet of
boys pedaled past her house ten times a  day. Mrs. Seeton's whistle calling her
kids in to dinner.  The day my black snake disappeared. The creek, the  tracks,
the dump, the red hills. My days did not pass  through, but stayed, filling the
shelves of my memory.  They became the library where today I do my research.
I also get material from my own kids. Along the way  I married another
children's writer, Eileen Spinelli,  and from our six kids have come a number of
stories.  Jeffrey and Molly, who are always fighting, have been  especially
helpful.
Ideas also come from everyday life. And from the newspapers.  One day,
for example, I read a story about a girl who  competed on her high school
wrestling team. A year  later bookstores carried a new book with my name on  it:
There's a Girl in My Hammerlock.
So there you are. I never became a cowboy or baseball  player, and now
I'm beginning to wonder if I ever really  became a writer. I find that I
hesitate to put that  label on myself, to define myself by what I do for  a
living. After all, I also pick berries and touch  ponies and skim flat stones
over water and marvel at  the stars and breathe deeply and grin from ear to ear
and save the best part for last. I've always done these  things. Which is to
say, I never had to become anything.  Or anyone. I always, already, was.
Call me a berry-picking, pony-touching star-marveler.

How did Jerry Spinelli become a writer?